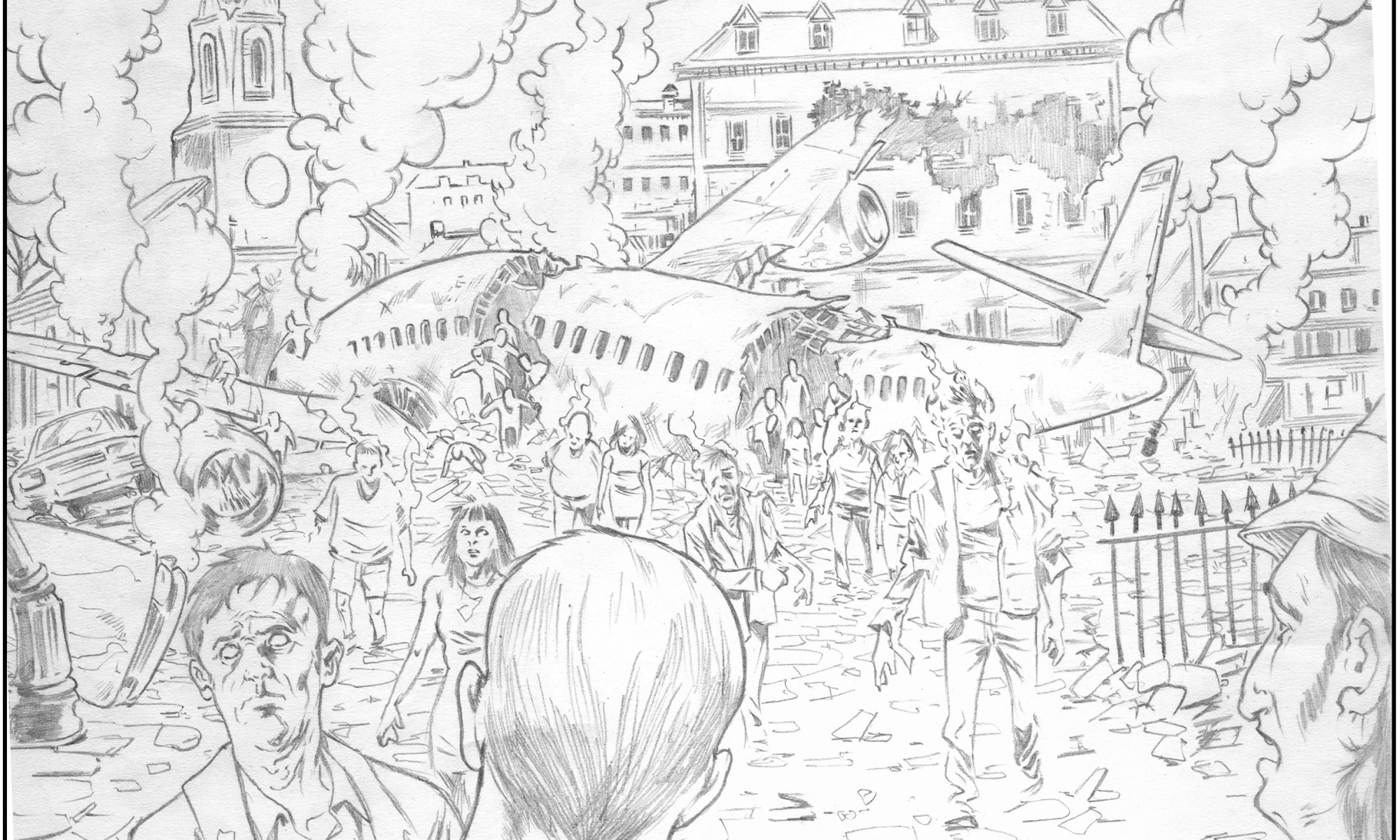 Writing down a dream leads to a lot more work

I woke up from a dream at 4 am. In the dream a guy who is sort of me is raking leaves on a suburban street, as are his neighbors all down the block. One by one the neighbors drop their rakes and walk away, all in the same direction, without a word. Sort-of-Colin is left looking at them as they leave, wondering where they’re going, then looks back at his leaf pile that now seems unimportant.

It left me feeling unsettled. Where were they all going? The scene was unusually clear and coherent for a dream after waking so I got up to write about it. It came out like this:

When the apocalypse came the zombies weren’t so bad after all. They didn’t want to eat our brains. They just wanted to get to Dallas. Really badly.

No one knows why they’re going to Dallas. Reports from non-zombs in the area are sketchy. We call it the Dallas Convention, but the agenda is anyone’s guess.

When you get “invited” you hardly notice it. You don’t become wild eyed, green skinned, and froth at the mouth. You just start to think about picking up and moving to Dallas, Texas. Not quite, Dallas, actually, more specifically, a spot just west of it. More specifically, LATITUDE?LONGITUDE. That exact spot is where you want go. So, so badly. Like, walk until your shoes fall off, and your feet.

How long it takes for the “virus” to take hold is variable. For some it is dramatic. The Jumpers caused a stir in the beginning.  Jumpers were an unfortunate subset that got full-on infected while on airplanes. In flight. In their zombie logic, the quickest way to get to Dallas, if you happen to be flying five miles high over anywhere in the Midwestern United States, is to go straight down. By pulling the emergency exit door off the plane and jumping [can this happen? NO IT CAN’T]. Or busting into the cockpit and commandeering the plane. Post 9/11, that kind of behavior is harder to get away with. It didn’t take long before airline travel was suspended.

While American zombies have it rough, zombies everywhere else have it infinitely worse. As most international zombies have discovered, Dallas is on a continent surrounded by oceans. This poses a logistical problem for European, African, and Asian zombies. Some of the early ones made a flight or cruise in conventional comfort. Zombies aren’t all heathens, some of the early ones booked hotel rooms. But as more and more zombies started migrating things broke down fast.

Zombies appropriated airplanes and tried their best to fly them. Several of the more accomplished zombie pilots actually made it to the US in various aircraft, including airliners, even a Concorde. The Air Force shot down many, when the military was still a thing. But a few of these zombie planes managed to land on runways, highways, cornfields and lakes in various state of intactness. Within the zombie community, Landers are the shit.

Pirate zombies are the ones with access to a boat. It took several big boat hijackings before officially sanctioned transoceanic travel was halted.  But Pirates aren’t choosy, anything might do: dinghies, fishing boats, Carnival cruiseliners, Navy destroyers. Quite a few had the skill and tenacity to make it to American shores. The Coast Guard found itself busy fending off an amphibious invasion off the US coastline. You figure at first the Coast Guard dudes were psyched to blow shit up. Those little turrets on Coast Guard cutters? They actually work, at least until the ammo runs out. But plenty of Pirates made it. Though not as rare as the Landers, Pirates still totally kick ass.

For those without boats, there is swimming. There is no more desperate zombie than a swimming zombie. Briefly known as Swimmers, they quickly become Floaters.  Floaters are so far the most gruesome problem caused by the Convention, unless you’re a shark. A quick look at the numbers:

7 billion people in the world.

Very few of them make it.

I try not to think about the oceans. The further away you stay from the coast the better.

Zombies are not inherently violent, provided you don’t detain them from getting to Dallas. But if they were violent as prezombies, then as zombies their behavior is sure to be worse. This makes the US-Mexico border a particularly tense location. Recipe:

The really strange zombies are the Planners. There are still a few of them around. They’re thinking about the trip to Dallas but haven’t left yet. I feel for these folks. Take Rick Ramos. He lives three blocks from here in Somerville, used to own a landscaping company, a nice guy. He’s been a zombie now for almost a month. We know it, and he probably suspects it too. (Early in the zombification process, it seem zombies have about as much insight as your average non-zombie, which is to say, it all depends.) We’ve seen him pack his car and then unpack it three times. He walks around the neighborhood, occasionally stopping and gazing south. He’ll talk to you about how Dallas seems great, he’s always wanted to go there. He seems sad and a little defensive about it. Sooner or later he’ll stop talking to us and leave for Dallas. Maybe we should shoot him.

We don’t know how the Convention is spread, what it is, or even if it spreads at all. Maybe it’s already in all of us. For a while we tried to hole up in houses, fall out shelters, Walmarts. People duct taped the hell out of everything, sat there with guns and water bottles to wait things out. But then you turn around and the folks next to you are pulling down the duct tape to get OUT. Soon we gave up quarantining, it was too much work.

What started the zombie apocalypse is also a mystery. There are theories: A virus. Microwaves from a solar flare. Mass hallucination caused by a byproduct in plastic water bottles. Maybe it was something Oprah said. Everyone has a theory, and we’d love to figure it out, but there’s just too much else to do.

Over the next year I occasionally added bit and pieces to this treatment, coming up with about twenty pages of random thoughts about this world. I didn’t know what it was but it was fun to work on–I liked the narrator’s voice and the simple premise. I thought it would be fun to investigate how society tries to cope and maintain normalcy as more and more of the population just walks away. After my decision to take a sabbatical from work I started considering this story more seriously. I wanted to make an actual finished product. Could it be a fictional sci-fi horror memoir? Just kidding, I didn’t have that thought, I just made those words up—obviously that is what I should have done. A screenplay? The odds of getting a movie made are infinitesimal. It could be good material for a comic book… Comic books are easier to make than movies, right? I don’t draw but after I write an awesome script maybe I could hire some starving art student at RISD to do it for cheap. And if you call it a graphic novel it sounds respectable! What are comics like these days? I’d actually delved back in a bit after being away from them for decades. I heard about a DC Comics relaunch, the New 52, in 2011, and my weekly routine brought me by the New England Comics shop in Malden a couple times a week. I started picking up a selection of books and sharing The Justice League and Aquaman with my son Ezra, a precocious 4 at the time. From there I got back into The X-Men and Daredevil, favorites from my junior high days. But soon most of the superhero books weren’t holding my interest. What else was there?The Walking Dead TV show was taking off at the time. I watched the first season and learned it was based on a popular indie comic by Robert Kirkman and Tony Moore. I picked up the first few volumes; it was well structured drama in gritty black and white with plenty of pulpy hack and slash. Awfully self-serious though. And it was plain old zombies. I wasn’t interested in using the usual zombie trope. I delved further into the indie comics shelves and found more inspiration: Ex Machina, The Massive, Great Pacific, the 80’s classic Winterworld. I was starting to find a class of stories mine might fit under: speculative fiction, grounded sci-fi. Those things sound cool!

I showed the Dallas treatment to Ethel and it made her laugh, and my writer buddy Ulysses liked the idea, though he was fairly drunk at the time. I didn’t have any other great irons in the creative fire, so as my one month sabbatical approached I laid out a plan:

It was a plan in fairly broad strokes.

Next time: You’ll see the first scene of The Trinity Project, the webcomic I’m making because someone told me to. Dumb ideas beget more dumb ideas!

Do you have friends or family creating stuff in their spare time who might like this blog? Send ’em this link!