I’m digressing from comic books in favor of an equally frivolous mode of middle aged creativity: making noise. I’m late with the blog because I was too busy gearing up to play dumb rock music for drunk friends.  Which brings me to the thesis for this entry: Rock is wasted on the young.

This first hit me in August at a concert. I was sleep deprived, a bit drunk, and middle aged, so conditions were perfect for this revelation, but I think it holds true even now that I’m better rested and sober (and slightly older).

The concert was Belly, an alternative band who had their moment then disappeared in the 90’s. Ethel and I were big fans in college, we both had crushes on Tanya Donnelly. Then we went to medical school and got married, Belly broke up, and life moved on for twenty years.

We survived residency, bought a house, had a child, started medical practices, had another child, lost a parent (Ethel’s mom). Lots of life. Life happened to the members of Belly too. Tanya made solo albums, married the bass player from Juliana Hatfield, had kids, became a doula. The drummer went into graphic design. The bassist, Gail Greenwood joined L7. She got breast cancer and survived it.

As the house lights went on Ethel said with a relieved smile, “I feel like myself. Not a mom, not a doctor, just myself.”

Ethel and I saw Tanya and Gail reunite for some Belly tunes at a benefit concert three years ago. Tanya, not in touring musician mode anymore, came out with glasses perched on her forehead and a plastic CVS bag full of guitar pedals that she dumped onto the stage with a clunk. That’s middle-aged rock right there.

This spring, over twenty years since their last album, Belly got back together and put out another one. They know they won’t get radio play or break it big again. But they still made new music that hangs with the old stuff and sounds great live. Gail was pogoing with her stickered Thunderbird bass, striking perfect rock poses that any teenage rocker would envy. And I bet you she feels it even more than a teenager, because she’s been on MTV, has had bands fall apart, has had fucking cancer, and she knows that every time you play a song for someone it is a gift that might not come again. 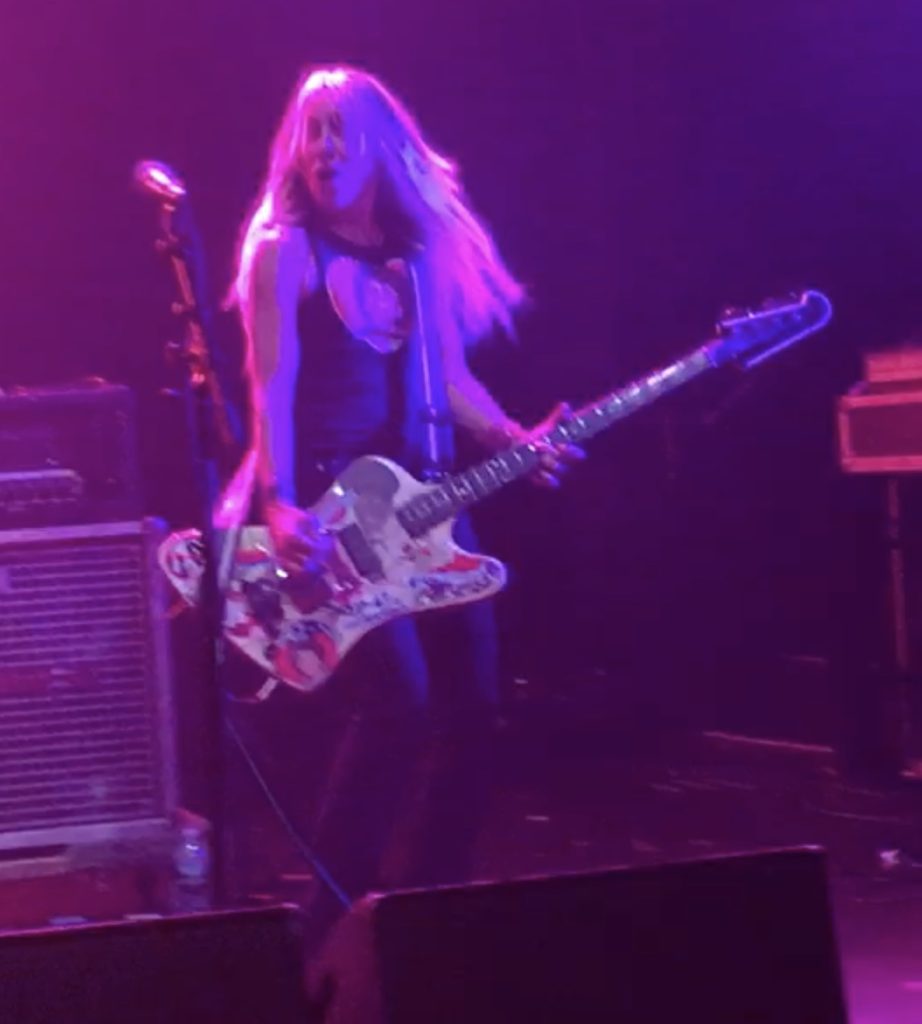 Belly rocked. They took a set break so everyone could call their babysitters, and their kids manned the merch table. The crowd, many wearing tight shirts from long ago tours, was in a time travel reverie. As the house lights went on Ethel said with a relieved smile, “I feel like myself. Not a mom, not a doctor, just myself.”

Around that time my nascent rock band of fellow emergency doctors, Twice-a-Day Ray, committed to playing a house party. Todd, Mike and I were in plenty of rock bands in our teens and twenties, and I’ve been recording music for years with Leckerphonics (my long distance band with Jason Finestone, check our latest here), but playing live music for people is something we all miss. During shifts in the ER we discovered we have similar tastes in music; we tried out some songs in my basement, had great chemistry, and decided to play a proper gig. We invited everyone we knew to Todd’s backyard for kegs and two sets of rocked up covers of 80’s tunes. We put up flyers in hospital bathrooms and worried about the police shutting us down. It was all the stuff we did with bands in college but we were much more efficient and competent about it, and of course we had disposable income to throw at problems. Hence renting a forest of lighting gear, a fog machine, a laser, a frozen drink machine, and making a custom banner. Also, the internet shows you how to plays songs now! And Facebook tells people what to do! No more stapling flyers to telephone poles.

After the invites went out I started to get cold feet, thinking this was dumb, who was I to be fronting a band at age forty five. Also, we somehow added a set of rock versions of female pop songs, so not only was I singing up front for the first time but I was singing Katy Perry, Taylor Swift and Mylie Cyrus, transposed down many many steps. But I realized the guys needed me to embrace being the front man for this show to work. As we got closer to the date, the music got better and better. I resolved to forget I was an attending physician, a dad, that I was anything but a rocker playing the hell out of some really fun songs. When the night arrived with about 100 people we cranked up the lights and the fog and played the songs a lot faster than we meant to. Mike’s hands blistered in the first set, but he taped them up and never missed a beat (being a grown up and an ER doc, he had packed blister tape.) I lost my voice pretty quick and had to chest shout the second half of the night, but we blasted through thirty tunes and played some of them again. Then some we didn’t know. Then “Wild Thing” of course. Jim Beam flowed and the end of the night gets hazy. People danced, stuff got thrown in the pool, the drummer went up front to sing “Louie Louie”, all the right things. We weren’t perfect, but I know my 18-year old self would have been impressed.

When you’re young, you rock for your future, for the things you want but can’t have: sex, money, acceptance. Rock music is forged from that desperate hormonal longing. But I’d argue that middle aged bands might rock even harder. They’ll never be as creative, and they’ll definitely feel worse in the morning, but they might feel the music even more, playing with eyes wide open. You’re playing for the youngster you were, feeling the aftershocks of that old horny aggression. You’re playing for the future, because you might not get another chance to play “Lady Marmalade” on stage. But most of all, you are playing for the present, for the you of right now, when everything else falls away and for a couple verses and a chorus you can be just yourself.

What songs should Twice-a-Day Ray play at a little league fund raiser? “Nothing” is an acceptable answer. So is Ol’ Dirty Bastard. Email me. By the Time I Get to Dallas #2 is funded and ready for preorder!