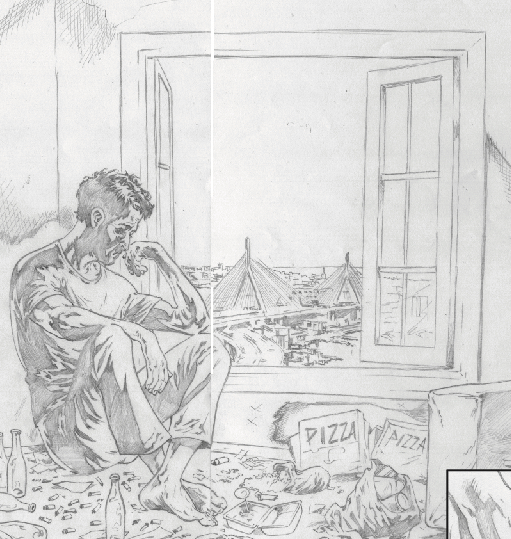 Happy New Year! I personally feel like boiled crap after a stressful couple weeks around the holidays, with too much work in the ER, all the stress of the season, and very little down time. But it’s a new year and it’s time to get rolling again. Luckily, even while I was busy working and whatnot, I’ve had a growing team of artists drawing my stuff so I’m being productive even when I’m not doing anything.

I’m not much for New Year’s Resolutions, but this is a good time to make a few creative goals for 2019. By writing them down and sending them out I can’t escape them so easily.

Goal: Book 1 of By the Time I Get to Dallas will be complete in 2019.
It may be one copy, or 100 copies, or 10,000, but I will hold this book in my hands this year. In fact, a cover and pencils for the first six pages are done, and ink and color are on the way. It is looking amazing. I want to share it all but then I’ll have nothing to tease you with if/when we Kickstart. We have some publisher proposals in the fire as well, we’ll see how that goes. But here are a couple new panel close ups from the amazing Juanfrancisco Moyano to whet your whistle. What the hell is going on? I can’t wait to read this!

Goal: I will use my mornings better.
Morning is the time to write, everybody says so. Unfortunately when you often work until 3 am it’s hard to be consistent with your mornings, and I really love sleeping late. But I know that when it comes to getting creative stuff done, one hour in the morning is worth two hours in the afternoon. Getting something accomplished first thing sets a tone for the whole day. So I’m going to make myself wake up more often, get some writing in, and then maybe pass out again.

Goal: I will get 100 people on the Pitdocpress mailing list.
I’m not far from that now, and I haven’t been all that aggressive about it. Why 100? It is sort of a magic number when it comes to getting a Kickstarter campaign rolling. It has to be real people, not robots or Estonian 13-year olds. Not that those aren’t real people. But if you know someone who might like this here blog about trying to stay creative in the face of overwhelming odds, pass it on!

Extra bonus: Banana Man!
While I proceed at a glacial pace on my own bloated comic book project, my son Ezra, age 10, has been working on his own comics and is rapidly surpassing me in every way. Unlike me, he is a lean, mean one-man operation. And if I may say so, his feel for visual storytelling is outstanding. He has an ongoing series about an original character, Banana Man, a crime fighting superfruit of immense power, sardonic wit and perhaps some Freudian overtones. Ezra’s progress has been amazing. Here is a sample from issue one, June 2018, when Banana Man first confronts his arch nemesis, Evil Lawyer! And here is what he did last week, the first two pages of Banana Man’s origin story: That progress was in just seven months! Look how he used the series of close-up panels on page 2 to build tension, wow! I may have to start including it on my own website. What website? This one, sucker!

So, what creative goals do you have for 2019? Email me and we can hold ourselves to them. After I take a nap.