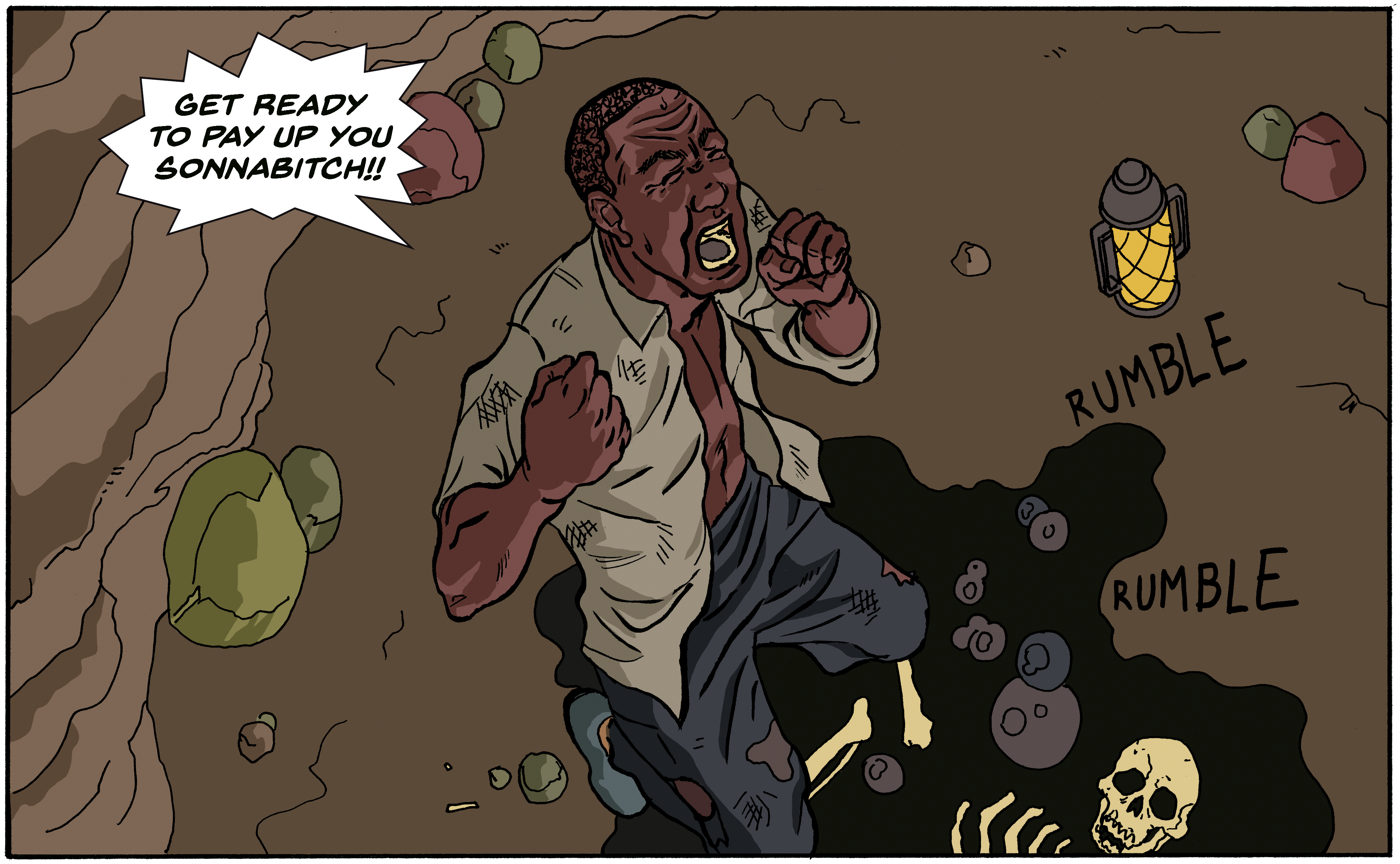 This one is about the nitty gritty of making comics. By the Time I Get to Dallas is largely written, and the whole story calls for 200 pages of art. I have an art team I paid to make an awesome sample minibook you may have seen. They’d like to be paid to do the full 200 page story, which seems fair. I’m still trying to interest publishers in the story but that’s not likely, it is hard to break in without a track record. So right now I’m waiting for my art team to free up from another project, then we’ll launch a Kickstarter campaign to raise money, build an audience and get the first of five books produced and published. This is how many comics get made these days; in fact even books from established publishers are routinely funded by Kickstarter. But in the meantime my colorist, Jay Moyano, emailed me: “a good idea would be to publish a webcomic with some stories related to the main storyline. Some kind of spin-off or prequel.”

Make a comic to make a comic. I think I get it. Good idea Jay!

Webcomics are comics published…on the web. They are easier and cheaper to put out because there’s no paper and printing. If I could find an affordable artist we could bang out some smaller stories, build up content to use for the Kickstarter campaign, I’d gain more experience making finished pages, and most importantly, it would be fun. Jay hooked me up with another artist, Jacinto Jimenez Jimenez, who lives in France. Jacinto is an up-and-coming artist who was looking for a project to work on. In writing Dallas I had developed a whole backstory that could be it’s own comic, kind like Tolkien’s Silmarillion but not in Elvish and not horrible. So this summer Jacinto and I got rolling with The Trinity Project, and we almost have the first two scenes done. I think it’s cool to see how it all comes together.

Each time I get a new page I feel a little guilty that somebody else is slaving away trying to make pictures out of my jumble of words.

Our first task was character design. I sent a couple blurbs about our characters, Joiner and William, Jacinto made some sketches, I adjusted them here and there, and we had them on the second try. Yup, Joiner’s missing a leg, he’s clumsy. Next up was the full script for Scene 1. Here are three pages of script for the first page of art. It reads a lot like a movie script, but more annoying and choppy. The script is nothing more than a conversation with the artist, who may be the only other person who ever reads it. Comics making is a global enterprise thanks to the internet; creative teams find each other on various online forums and often live on different continents and speak different languages while coming from very different backgrounds. This first scene is about wildcat oil drilling in Texas in 1930, something Monsieur Jimenez probably knows even less about than I do. So I included some pictures to help him see what I’m seeing in my head. So I sent the script to Jacinto and couple days later I start getting back pictures! It is kind of crazy, each time I get a new page I feel a little guilty that somebody else is slaving away trying to make pictures out of my jumble of words. It makes you feel powerful and yet completely exposed and helpless. But when it comes out like you had it in your head, or better, it is pretty damn awesome. The first pencils are volume sketches to lay out the panels and basic art. One of the hardest parts of writing comics is allowing the pictures to tell the story by choosing the right moments to show in a panel, while limiting the text as much as possible. I’ve been so excited to see the scenes on paper for the first time that I have not always paid close attention to them. On a later scene I never specified the height of the characters, and one of them came out much shorter than I intended. I didn’t pick up on it until the picture had been inked, when changes are harder to make. But this is the reason I’m making this webcomic, to get better at making comics, eh?

After the volume sketches Jacinto did final line drawing in ink. Ink is necessary because pencil generally won’t come out clearly enough to be seen when printed, and even on screen it is hard to see. I’m still learning what goes into the inking process and what I like and don’t like about an inker’s style. I know I like clean light lines, not overly inked. After I got the first inks back I realized Jacinto does no shading or shadows at all with ink, he adds it later through the use of color, which helps give the art a spare, overexposed look that I think works for this story set in the plains of Texas. Next up is color. Often color is done by another artist, but our goal to was keep the process simple and inexpensive, so Jacinto agreed to do a limited color style for this story. Pretty cool. Lastly, lettering. A much more intricate process than it might seem, lettering is the quickest tip off to a not so good comic. The placement of the bubbles and the connections between them all establish the direction and pacing of the reader’s eye and make sure that the writer’s words are read in the right order and with the right emphasis. At the same time, the lettering can’t detract from or cover up the art. Many writers do the lettering themselves to be able to control it directly. Sadly I have not had the time to learn Photoshop. But even though I don’t know how to do it myself, I am pretty specific and demanding about how the lettering looks. Poor Jacinto got a crash course in how annoying I can be about placement of words and boxes. I think he would much appreciate it if I’d learn to do it myself. Once it’s lettered the page is done! Click here to see the whole scene on my snazzy new website.  And scene 2 should be up any day! Hot comics making action!

Next up: Not sure, maybe a new Dream Projectors feature about someone doing something cool with their nonexistent free time. Maybe it should be about you. Let me know what you’re up to!