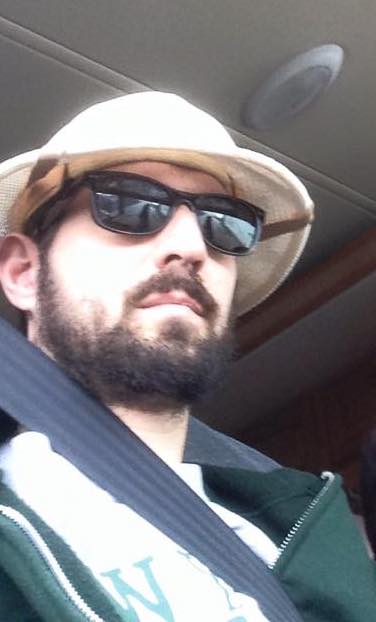 Sabbatical, Ulysses, and the struggle for self actualization Sabbatical. A mystical search for enlightenment. Donning a pith helmet, roughing it on the African savannah, logging your observations on meerkat copulation in a battered leather journal; blowing centuries of dust off ancient tomes in a secret Alexandrian library; licking hallucinogenic frogs with shamans in the Amazon; sipping sherry in a candlelit crypt while discussing the course of human history with shadowy figures who might be vampires. These are things I did not do on my sabbatical.

Why the hell am I making a comic book? I have to remind myself sometimes. It started with a sabbatical. That part at least sounds sort of cool.

In 2012 I was approaching forty and feeling bum rushed by middle age. I had gone through four years of medical school, three years of emergency medicine residency, and worked for seven years as an attending physician; not to mention Ethel and I had gotten married, bought a place and had two children. All good things of course, but adulthood had hit hard and my thirties were a blur. That’s when I learned my practice group offered a “sabbatical.” No one had ever done it, but theoretically after five years of service you could take unpaid time off for some sort of enrichment. Well hell, I needed some enrichment, sign me up!

With no real plan, I told my boss I’d like to take a sabbatical. It was vertigo inducing, but if you have the opportunity to make such an utterance I recommend it. She said, “Okay…I don’t know what that means, but okay.” We agreed on one month, a modest sabbatical but all I felt I could get away with.

What is an appropriate emergency medicine sabbatical? Seeking out ancient cures for ass pain?

Taking a month off without pay is not something I did lightly, but Ethel was supportive. Rather than go a month without a paycheck cold turkey, with some foresight I was able to prorate the salary loss over six months to lessen the pain. I chose March 2013, a nice boring month when no one at work would miss me. But as 2012 wound down and I hit the big 4-0 I still didn’t know what I would actually do.

What is an appropriate emergency medicine sabbatical? Seeking out ancient cures for ass pain? No, I what I needed was a break from medicine. But with Ethel working, two kids in school, and already taking a significant budget hit, I didn’t think I could travel. No meerkats or ancient crypts for me. And let’s face it, I’m a coward. I needed something creative I could do at home, maybe writing or intensive music lessons. I’d always fancied myself as someone who would be a writer if only he had the time and willingness to write. I’ve written short stories and creative nonfiction in drips and drabs since high school, and that seemed like a good format to tackle with a month. My experience in medicine had provided a ton of material and was the obvious topic to write about, but I wanted NOT to be a doctor for a month—the last thing I wanted to do was write about medicine.

I confessed that I wanted to be a “real writer,” so I guess I should write some short stories about being a doctor.
Ulysses said, “But that’s so sad.”

Luckily, around this time I met an inspiring chap I’ll call Ulysses. Our kids go to school together, he lives two blocks away, and on our first meeting he mentioned he was a poet. I’m sure I have friends who write poems, but this is the only one who refers to himself as a poet. Indeed, he has a masters in poetry and is published in poetry journals, but more important, he wakes up at 5:30 each morning, pounds a Red Bull, does a few push ups, and writes for an hour before his kids wake up. He’s been doing it for years and has stacks of filled notebooks to show for it. This dedication is what makes him a writer. Not a wannabe but the real thing. Ulysses needs a code name because he has a writing project that will take over the world and before that happens I can’t reveal his identity. Ulysses thinks big.

Ulysses and I began a semi-regular drinking session where we took turns talking about our dream projects, the things we would like to learn, the ways we could “self-actualize” in our remaining decades on this planet in order to become the ultimate versions of ourselves. (Ultimate Colin: doctor, musician, writer, architect, ninja.) I thought we invented self-actualization but Ethel informs me that no, dumbass, it is a well known self-help concept. I think maybe Ulysses and I developed it independently of that but I can’t prove it. In our sessions I spitballed ideas about my sabbatical. I confessed that I wanted to be a “real writer,” so I guess I should write some short stories about being a doctor since that is what I know.

He was right. I was looking for a quick path to writing respectability but with no conviction.

Well…I do have this one idea that came to me in a dream. I think it could make a good comic book…

Ulysses clapped his hands. “That’s what you should do.” Next time I’ll share the dream scribblings that became By the Time I Get to Dallas, and I really will write about a film making friend of mine.