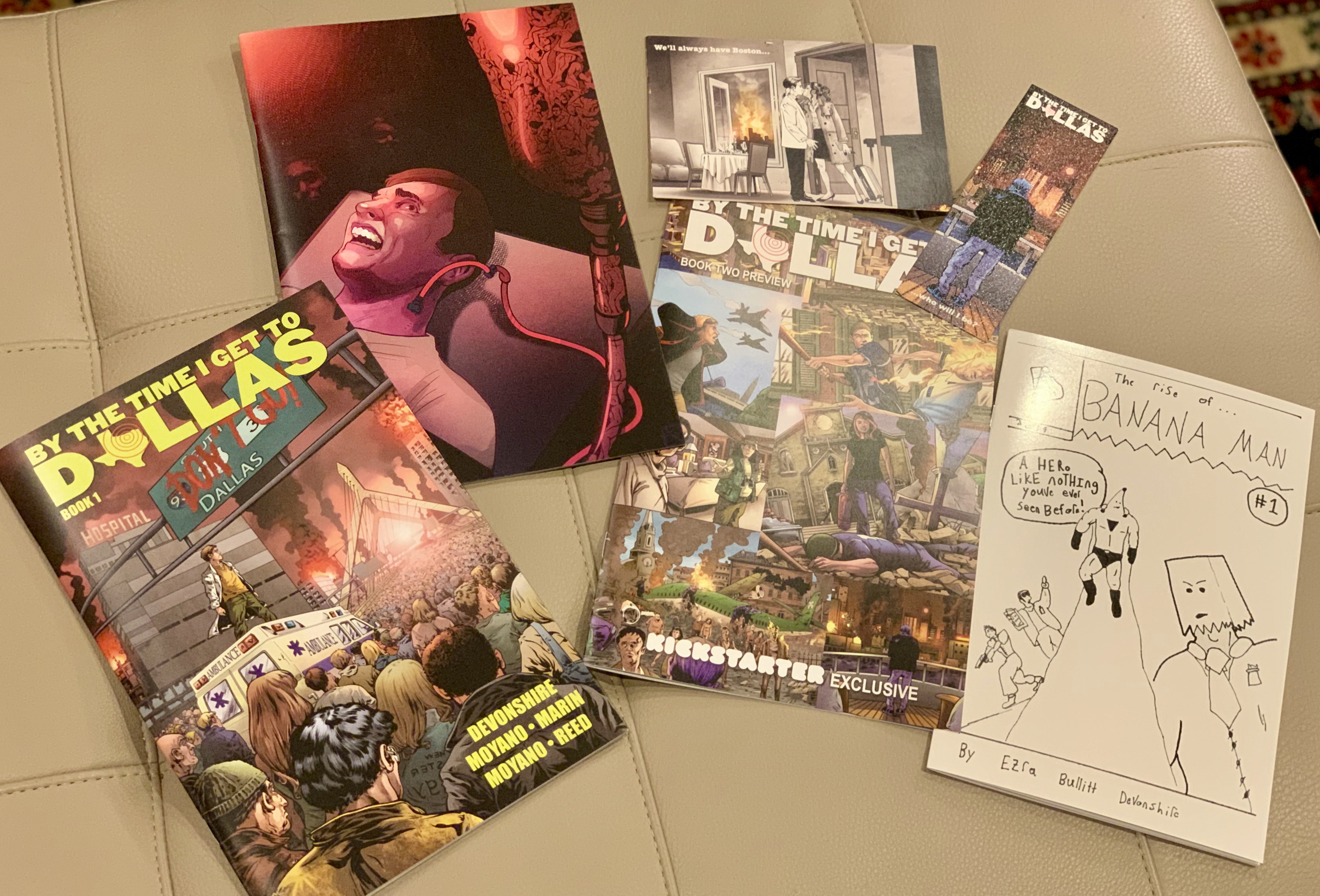 I love the smell of offset printing in the morning!

All the weird that’s fit to print

The far flung PitDoc Press Empire is revving up to fulfill your Kickstarter pledge, your thirst for cool stuff, you very soul itself. Let’s take a tour:

Florida: The Comic Impressions presses are cranking out stuff as fast as I can order it. They’ve done 1500 offset prints of Dallas #1, 100 Book 2 Previews, 200 Rise of Banana Mans. Next up: the Medical Student and Bad Ass art prints and finally, The Trinity Project Volume One. The stuff is looking fantastic. Thank you Rich Boye at CI!

Dallas: After I personalized and the kids addressed 100+ Early Bird Backer postcards we sent them to the PitDoc Press Ambassador to Dallas, Tami Thomsen, with a crucial mission to mail them from Dallas to get a “Dallas” postmark on them. And man it really should have worked, except for the small problem that the US Postal Service doesn’t actually do that anymore. Nope, postcards don’t get a postmark, they don’t fit in the modern processing machines. Though the official website assured me I could get postmarks, the flesh and blood postal workers in Dallas were less accommodating. The indefatigable Tami went to three different post offices, trying her best to help me get this one little detail right, but alas, it was not to be. So the postcards have gone out from Dallas and should be arriving all over the world as I type this, and though there is no postmark, rest assured that that 4×6” piece of paper has in fact traveled from Boston to Dallas and then to you, dear reader. Let’s all give a big hand to Tami for being awesome.

France: Meanwhile we’re still making new pages of comics, people. It was eating at me that Trinity Project Volume 1, the prequel to By the Time I Get to Dallas, really needed two more pages to complete Scene 4, and I just couldn’t send it to the printer with that scene incomplete. So I wrote, and Jacinto Jimenez drew, and now he is working on the colors. I hope to have the scene and the volume wrapped up and printing soon.

Spain: One crucial member of our team, Dallas colorist Jay Moyano, is recuperating after a serious health emergency that put him in the hospital. He’s back home and on the mend and we are all pulling for a complete recovery. As much as I’ve loved Jay’s coloring when I’ve seen it on computer, it just doesn’t compare to how gorgeous it looks on the printed page. Can’t wait to get some copies to Jay and all of you. Get better Jay!

Boston: Our friendly neighborhood UPS guy might have a sore back after lugging 500 lbs of comic books up the front steps into our building. I had a sore back after lugging them down to the basement. I split the order in two just so he wouldn’t be mad at me, but even a half order was 4 boxes weighing 60 lbs each. Now they are stacked on shelving and getting signed, boarded, and bagged.

Why don’t you have it yet? Because it is friggin’ complicated is why. I feel it is important that all KS backers are sent their physical stuff at the same time, so until I have the remaining fulfillment items I’m holding onto the books. This includes the neighbors and coworkers I see every day–even they don’t get a book until it’s time to send them out to everyone. In fact, the only people who have the book so far are my parents, Craig and Susan, who got them hand delivered today. They said it looks great, and they went to RISD. For everyone else, I’m dying to send it to you, but luckily we are still well within our original estimated shipping date of early December. Soon!

Chief among the products we have in house now are the the professionally printed copies of the Rise of Banana Man by Ezra, age 11. Ezra worked incredibly hard writing, drawing and lettering his original book, and seeing him open it for the first time was pretty great. See for yourself: If you were foolish enough not to order the Bananas for Dallas reward package, but still want a copy of the Banana book, it’s not too late. You can buy it directly at my Gumroad shop and I’ll add it to your KS order when it ships:

geekorama.net gave us a great review, 4/5, and I quote: “Thought provoking…The precision that has gone in to this book really shows. It has such a depth that it could easily be adapted in to an animated series or film.” Good idea…

Now I have to figure out how the hell this thermal printer works to print out my labels and postage. Provided I don’t bleed out from paper cuts, I’m hoping my next update will announce that your packages are in the mail!